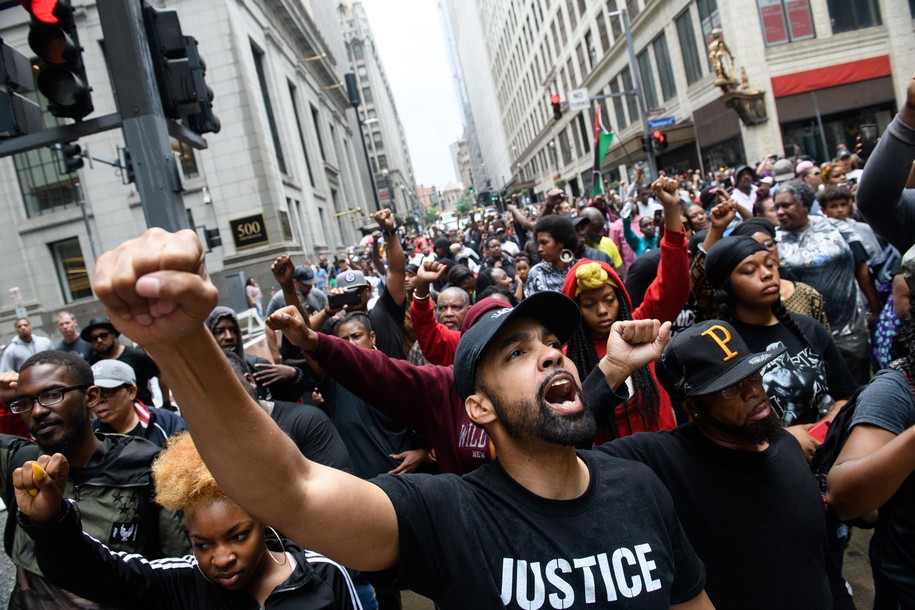 Black folks in America have been told that a rising tide lifts all boats and that swift changes are not only improbable, but impossible. We are simultaneously being taught the lie that America is a democracy built by “revolutionaries” who changed the system with war and uncivil disobedience. This contradiction is why a sustained, nonapathetic populace has come as a surprise to many. Americans are supposedly “united in freedom,” yet Juneteenth is a day we celebrate in isolation, as if our formal liberation did not make this country truly free.

Witnessing Floyd’s murder while the country was still mourning Ahmaud Arbery’s lynching and being made aware of the failed attempts to hide Breonna Taylor’s murder were a shock to America’s system. Due to COVID-19 stay-at-home orders and social distancing protocols, it was harder to look away, disengage, or ignore the obvious problems and unrelenting pain that Black people endured every day. While the world stopped due to the pandemic, the war on Black bodies in America continued. It was finally clear to see, when nothing else mattered but the health and safety of the world, that Black lives still didn’t matter in America. This drove people out of their homes and into the streets.

Here in Dallas, we have seen a solidarity like never before. This solidarity I have seen with the marginalized people in this city has been overwhelming. While attending a rally, BYP100’s Dallas chapter led a crowd of thousands in a chant that declared “Black lives matter! Black queer lives matter! And trans lives matter!” This was a particularly important chant to hear at a time when Dallas leads the country in Black trans murders. So while we seek justice for the names in the media, it is imperative to also highlight those we don’t see on TV. After all, we are not free unless we are all free.

These protests have been met with hostility and violence by the police. There is a certain privilege that comes with demanding your freedom that Black people are never allowed to access. At its root is the same entitled mindset that believes some folks, more than others, have the right to walk into a restaurant and complain about their order, and equates that right with walking into a government building with AR-15s to make demands without arrest or persecution. While others demand action and are not worried about any misconception of violence or victimhood, Black people contend with a constant internalized dismissal of our rights and needs for simply raising our voices. We tend to laugh at the attitude that says “let me speak to your manager,” but it is exactly that point of entitlement that we should all have—without repercussions.

Yet when peaceful protesters take the streets to make their voices heard peacefully without a weapon in sight, they are met with tear gas and “non-lethal” rubber bullets that cause permanent damage. This leaves us asking how we can obtain the revolutionary changes we need without revolutionary means. What is a peaceful protest, historically? Has it ever drastically changed America fast enough to meet the moment’s urgency? We must recognize that all radical action and changes happen quickly. That allows for the swift progress we need without allowing the co-opting and compromising our movement, or diluting the needs of the community.

On June 1, the Dallas Police Department tear-gassed, shot rubber bullets at, and attempted to arrest over 600 protesters for peacefully walking over a bridge. The drastic violent call to attack protesters was made by Dallas Police Chief Reneé Hall, who has defended her actions and denied the use of tear gas. This is a clear example of the militarization of the police in the worst way. However, this time the Dallas police chief and the police department have been criticized by the community and even some elected officials. The city of Dallas has also been called on by local organizers such as the In Defense of Black Lives Coalition to defund the police department and invest in the community. These demands have been at the center and core of every direct action in Dallas for three weeks. As the community echoes the calls for defunding the police, they have been willing to put their bodies on the line to shut down streets and disrupt business as usual. Now suddenly the city’s local officials have been “willing to listen” in a way that had not been previously possible. Due to the city of Dallas’ willingness to be engaged and unyielding, we now have an opportunity to build Dallas with the people power that it deserves. So for this Juneteenth, we have much to celebrate but much to prepare for. The movement for Black liberation is not over, but we thrive in our joy even as we fight.

Indianna Taylor is a photographer/blogger turned community activist/organizer. Now an organizing member of BYP-100 Dallas, Indianna works with multiple organizations that are for progressive change in the community, including “In Defense of Black Lives Dallas Coalition,” with goals of building a stronger, more unified Dallas, and empowering the community to take a bigger role in the way that they are governed.

Prism is a nonprofit affiliate of Daily Kos. Our mission is to make visible the people, places and issues currently underrepresented in our democracy. By amplifying the voices and leadership of people closest to the problems, Prism tells the stories no one else is telling. Follow us on Twitter, Instagram, and Facebook.