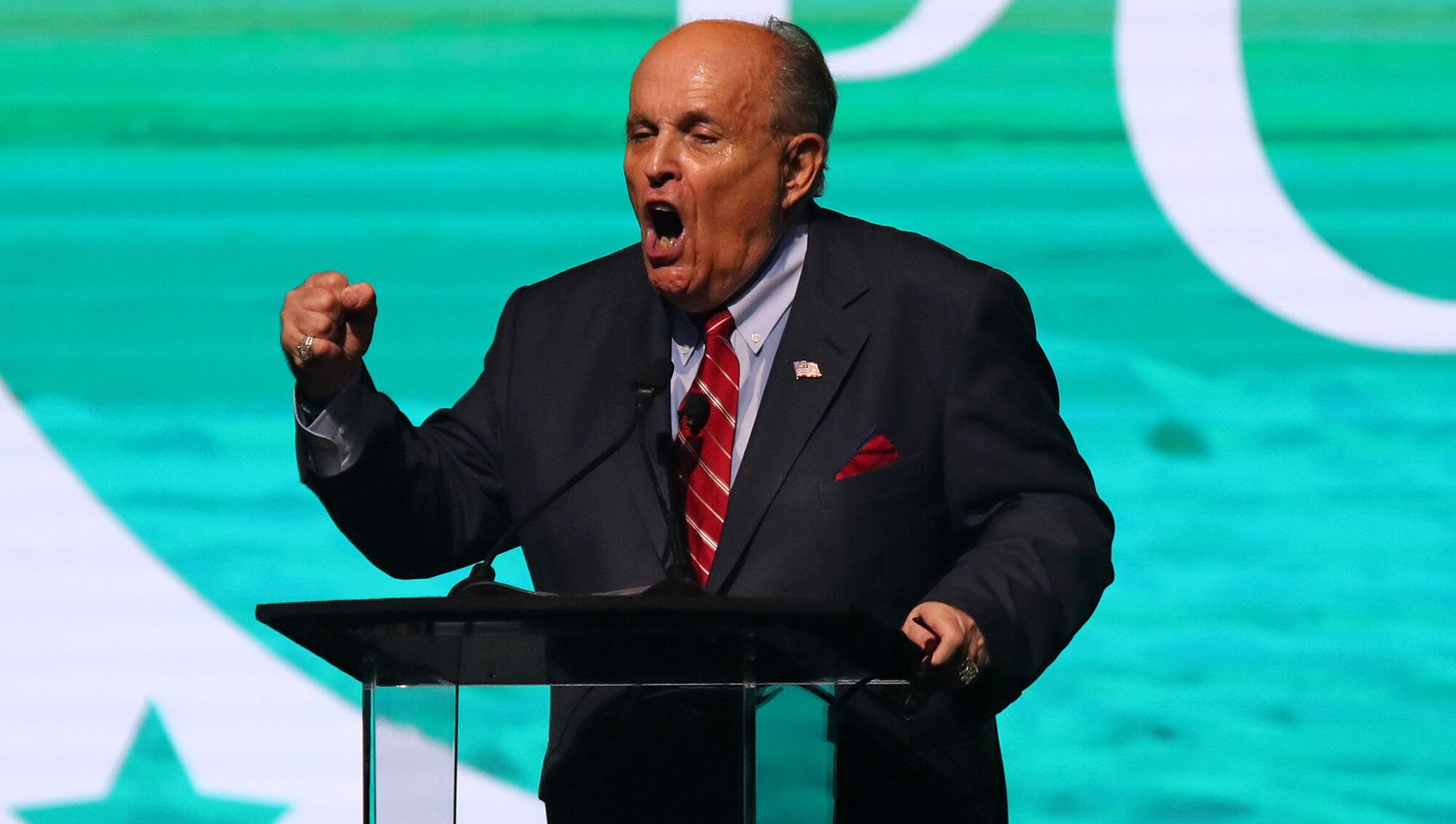 “Soros has funded many enemies to the state of Israel, including groups that support (the Boycott, Divestment and Sanctions movement), whose ultimate goal is to destroy the Jewish homeland,” Trump’s personal attorney tweeted Tuesday afternoon. “Those who oppose these groups are not only better Jews, but better people than him. Most certainly not anti-Semitic.”

Soros has funded many enemies to the State of Israel, including groups that support BDS, who’s ultimate goal is to destroy the Jewish homeland.

Those who oppose these groups are not only better Jews, but better people than him. Most certainly not anti-Semitic.

The tweet echoed Giuliani’s bizarre anti-Semitic claim surfacing in an article published on Monday that he was more of a Jew than Soros, a Holocaust survivor.

“Don’t tell me I’m anti-Semitic if I oppose him. Soros is hardly a Jew. I’m more of a Jew than he is,” Giuliani told New York magazine’s Olivia Nuzzi in an interview that took place earlier this month.

“I probably know more about ― he doesn’t go to church, he doesn’t go to religion ― synagogue,” the former New York mayor ― raised as a Catholic ― said in the interview. “He doesn’t belong to a synagogue, he doesn’t support Israel, he’s an enemy of Israel. He’s elected eight anarchist DA’s in the United States. He’s a horrible human being.”

“I’m more of a Jew than Soros is.” – RUDY to @Olivianuzzi https://t.co/y3hUPeAYPm

Giuliani’s comments to Nuzzi stemmed from his conspiracy theory that Soros controlled former U.S. Ambassador to Ukraine Marie Yovanovitch, who Giuliani was largely responsible for ousting from her post earlier this year. Giuliani and former Ukrainian prosecutor Yuriy Lutsenko started a smear campaign against Yovanovitch because she sought to thwart Giuliani’s efforts to try to find dirt on former Vice President Joe Biden through official channels.

Continuing his rant about Soros’ supposed influence, Giuliani falsely claimed to Nuzzi that the investor “put all four ambassadors there. And he’s employing the FBI agents.” Nuzzi responded that Giuliani, who she noted had been drinking Bloody Marys, sounded crazy.

Giuliani’s comments about Soros resulted in hashtag #RudyIsAnAntisemite to trend on Twitter.

The Anti-Defamation League did not immediately respond to HuffPost’s request for comment on Giuliani’s Tuesday remarks. But league CEO Jonathan Greenblatt said Monday that Giuliani “is not the arbiter of who is Jewish and who is not,” and that he should immediately apologize and retract his comments “unless he seeks to dog whistle to hardcore anti-Semites and white supremacists who believe this garbage,” according to the Daily Beast.

Saying that he controls ambassadors, employs FBI agents and isn’t “Jewish enough” to be demonized is.

Our experts explain the #antiSemitism behind Soros conspiracies: https://t.co/rK4ZXecMxn https://t.co/uFvsRvB2Ys

The right, including Trump and his allies, have long promoted baseless conspiracy theories against Soros, a philanthropist widely known for funding progressive causes mostly through grants from his Open Society Foundations.

The president claimed last year that the sexual abuse allegations against then-Supreme Court nominee Brett Kavanaugh were funded by Soros, and that political protesters were paid by the billionaire. Now-convicted Roger Stone, a longtime Trump friend and former political adviser, promoted a conspiracy theory that foreign affairs expert Fiona Hill was a “mole” for Soros while working in the White House as the top National Security Council official for Europe and Russia.

Hill debunked that claim while publicly testifying last month at a House Intelligence Committee impeachment hearing, calling the right-wing attacks against Soros the new “Protocols of the Elders of Zion” ― infamous anti-Semitic writings that were spread by a member of Russia’s czarist secret police in the early 1900s and later embraced by Adolf Hitler.

The ADL published an article last year explaining why the promotion of conspiracy theories against Soros are anti-Semitic. Soros has long been a target of authoritarian regimes in Eastern Europe “where resentment lingers for his work to build democratic institutions and governments after the fall of the Iron Curtain,” according to the article. The philanthropist has been attacked for years by Hungarian Prime Minister Viktor Orbán and his right-wing government.

“Even if no anti-Semitic insinuation is intended, casting a Jewish individual as a puppet master who manipulates national events for malign purposes has the effect of mainstreaming anti-Semitic tropes and giving support, however unwitting, to bona fide anti-Semites and extremists who disseminate these ideas knowingly and with malice,” the article said.