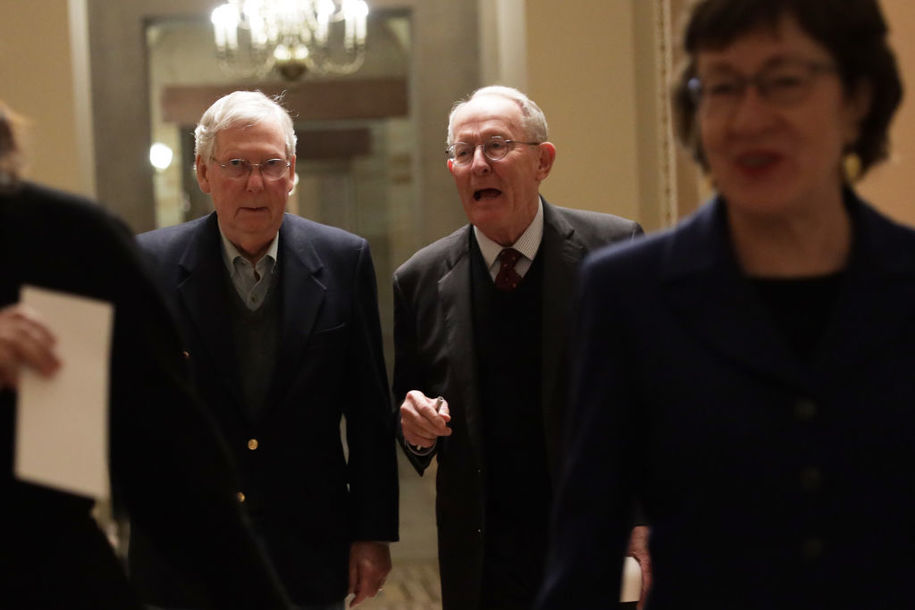 Throughout the evening, the House managers continued to make a plea for some form, any form, of sanity. As the night went on, Rep. Adam Schiff outlined a plan in which the House would agree to limit witness depositions to a single week. It would let Chief Justice John Roberts have first say over the appropriateness of every witness and every document. It would let the Republican-dominated Senate have veto power over Roberts’ decisions. It would hold depositions off the Senate floor so they didn’t take up the chamber’s time. It would agree to not try to fight any decision in court.

But on the other side, Trump’s team agreed to nothing. “With all due respect,” it wouldn’t let Roberts make any decisions. Or the Senate. It would fight every witness called by the House in court. It would call “dozens” of witnesses. It would demand that every decision be appealed, appealed again, and would not stop until every decision hit Roberts again, in his role at the Supreme Court. After repeatedly blaming the House for failing to reach “accommodations” with the White House team during the House hearings, Pat Philbin, Pat Cipollone, and Jay Sekulow made it brutally clear that they had no interest in reaching accommodation on anything.

Just as they had done in the House, the members of Trump’s team didn’t just hint that they would turn any attempt to get witnesses into an agonizing slog through the courts that could not possibly be settled before the election; they said it. Repeatedly. That they would not cooperate on any point, and would consume the Senate’s schedule indefinitely, was their theme song.

Throughout the evening, the handful of Republican senators supposedly still having doubts was watched closely. It became obvious that Susan Collins had been given a hall pass allowing her to try to salvage her worst-in-the-nation popularity through the demonstration of yet another pointless vote. But that moment came during a break in which Murkowski and Alexander huddled together, and a final five-minute halt in the proceedings so McConnell could make sure that he had the guarantee of no witnesses nailed down. It was at that point that the two critical votes joined with the most blatant Trump sycophants in the Senate to demonstrate exactly where they were coming down.

Adam Schiff hurled himself into his next response, clear on what was happening and beginning with, “Let me blunt.” He was. He explained exactly what it meant for Republicans to vote against witnesses, and to do so in the way they were indicating they would. It meant an absolute abdication of the Senate’s oversight role, and the over to Trump of power so great that “imperial presidency” is not a powerful enough term to describe it. Then Trump’s team handled a final response from a large group, making it clear they understood fully. When the final question reached the House team, it was Jerry Nadler who took it rather than a clearly exhausted, disgusted, and heart-sore Schiff.

Shortly after the session ended, Lamar Alexander issued a statement making it clear that he was indeed siding with Trump, on the worst possible grounds. He didn’t dispute the case that the House had brought. Far from it. Alexander said there was no need to bring in witnesses to prove that Trump had extorted slander, had threatened an ally in the midst of battle, and had schemed to put his own interests above the national interest. Alexander found all that worthy of the patented “moderate Republican” tsk-tsk. Then he left the national stage saying that, even though he believed all that was true, it still wasn’t something to do anything about.

Some time this morning, Lisa Murkowski is expected to deliver her own statement of tribute.

After all the talk, the dispute came down to one small point: Adam Schiff kept telling the Senate that Donald Trump is not a king. Republicans disagreed.