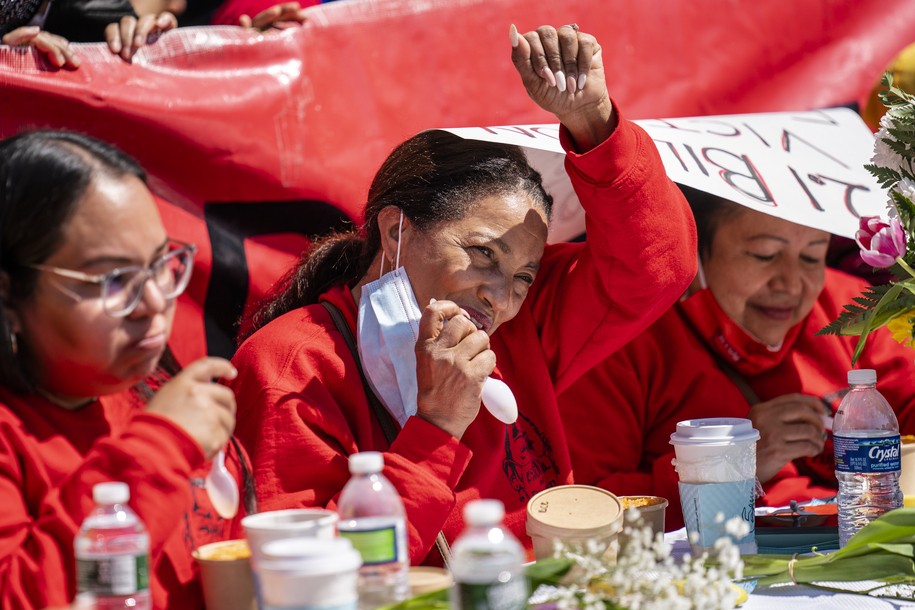 While the fight was about relief, Ramirez told amNY the fight went beyond that: “It is more than $2.1 billion dollars. It is actually a recognition of undocumented workers,” she said in the report. “This is the future. This is the future that we’re leaving behind for our kids, and a reminder for those who doubted us. This is proof that we did it.” Hunger strikers, who were pushed in wheelchairs to tables set up under the Washington Square Arch, “were welcomed as returning heroes to much applause and fanfare,” the report said. They then broke their fast with small meals of bananas, fruit, and soup.

amNY reported that among the hunger strikers was Felipe Idrovo, who tragically lost both his father and brother to COVID-19. He said that when his participation in the hunger strike began to take a physical toll on his body, his mother begged him to stop. “But in Idrovo’s mind, he could not abandon his 23-day protest,” the report said. “This fight is not just for us who are here, but for everyone who has been supporting us,” Idrovo told amNY. “This country is known for democracy for liberties, but the way we get them is by fighting in the streets and demanding what’s ours. We will continue to fight for many more years to come.”

The inclusion of this historic $2.1 billion fund (“New York’s fund dwarfs a similar relief program enacted in California, where officials set up a $75 million cash assistance program last year,” The New York Times reported) in the state’s $212 billion budget was the result of a year-long effort by advocates, grassroots organizations, and essential workers who were excluded from survival checks and unemployment insurance despite paying into it through their tax dollars.

“The $2.1 billion fund creates two tiers of aid,” the Fiscal Policy Institute said. “Tier 1 is on a rough par with unemployment insurance, and provides $15,600 to undocumented workers who can meet its strict standards of proof of eligibility. Tier 2 pays $3,200, and is on a par with the three rounds of federal stimulus payments ($1,200, $600, and $1,400).” The Fiscal Policy Institute estimated that nearly 300,000 workers could be eligible for relief. Make the Road New York, which was among the advocate organizations that championed the fund, has created a hub with more information here.

But as previously noted, advocates have expressed concern that certain provisions could make it very difficult for some undocumented workers to access relief. “The budget language includes no clear way for workers to self-attest their employment status or use other forms of documentation and evidence that courts widely accept,” Make the Road New York said. “Given that excluded workers primarily work in the cash economy, it’s essential that the rollout of this fund provide common-sense flexibility in the kinds of proof that workers can provide.”

They also hope that the effort in New York moves other states to also act to aid excluded workers. In nearby New Jersey, a spark has already been lit, with excluded workers there launching their own hunger strike in their fight to win relief. “This is sending a message—people who have been hungry for over a year are willing to do this and go without food for multiple days to show how much this is a life or death situation without relief,” Make the Road New Jersey Executive Director Sara Cullinane told NJ.com.

Among those striking in New Jersey is Pedro Buitrago, an undocumented immigrant who has been out of work for four months. “Hunger doesn’t wait. Rent doesn’t wait,” he said in the report. “And if people who are here legally are in so much trouble they need help from the government, why wouldn’t we need the help too? We don’t know who to ask anymore and what road to take.” NJ.com reported that when Buitrago’s wife became sick with the virus, he debated going to the hospital due to their legal status.

“I know it would help to have some money from the government, to help calm my situation,” Buitrago continued in the report. “It can’t cover all the costs but it would have been helpful from the start.” NJ.com reported that Gov. Phil Murphy said that “’[t]here should be no reason that gets us to a hunger strike, and let’s keep them in our prayers,’ he said, continuing that the state won’t get to full economic recovery ‘unless we bring everyone along on that journey.’”

“Let us be clear, New York State will lead the nation with this excluded worker fund,” Fund Excluded Workers Campaign Coordinator Bianca Guerrero said according to amNY. “This is a tremendous victory for these workers, but the fund is not perfect. First, our brothers and sisters who were recently released from incarceration are still left behind. That ain’t right. The requirements that are imposed by Governor Cuomo will make it harder for workers to get access to this fund. That ain’t right. We will be watching the implementation of this fund very closely because these workers have not eaten for 23 days but they have been starved for years. Enough is enough.”