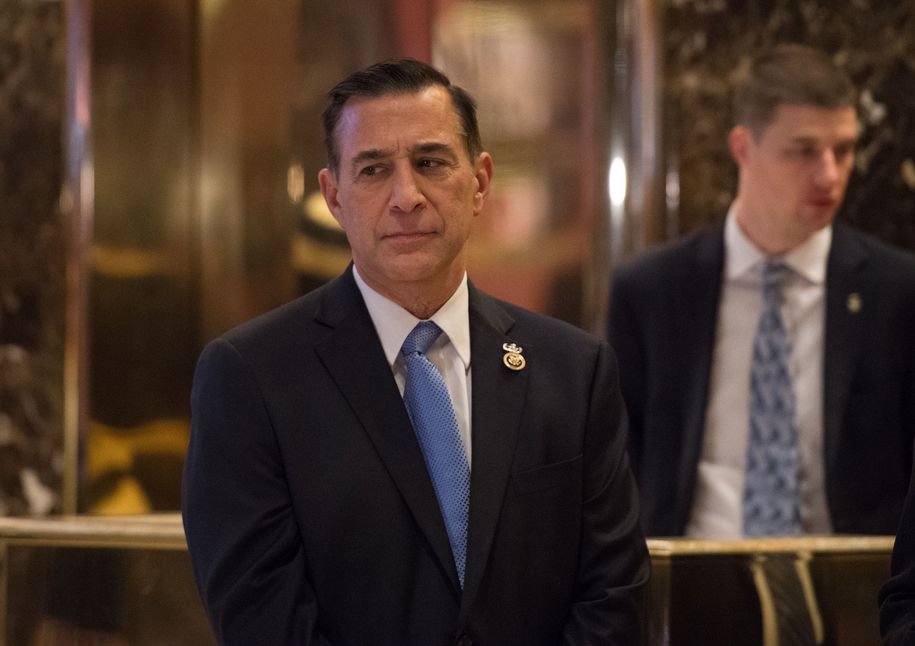 The spot then highlights a large headline from the Los Angeles Blade that reads “Carl DeMaio: California’s gay GOP kingmaker” and a considerably smaller excerpt from the article quoting DeMaio saying, “My job isn’t to support Donald Trump.” The image then switches to an article from The Hill titled “Gay GOP Candidate: Party Must Change” with some text reading, “DeMaio said some illegal immigrants should be given a path to citizenship.”

The ad drew quick condemnation from two local Republicans, San Diego City Councilman Chris Cate and county party chair Tony Krvaric, for emphasizing DeMaio’s sexual orientation. Meanwhile, a spokesman for San Diego Mayor Kevin Faulconer, who is one of Issa’s most high-profile endorsers, also declared, “Campaigns should focus on people’s positions on the issues, not people’s sexual orientation.” However, Issa’s intra-party critics were silent about the ad’s blatant racism, and Faulconer’s team also made sure to note that the mayor is still backing the former congressman.

Unsurprisingly, Issa dug in and defended himself. On Thursday, when local ABC reporter Jon Horn asked him about the spot, Issa initially responded, “I have no idea what you’re talking about.” After Horn elaborated, Issa responded, “You’re talking about some headlines from actual newspapers” and continued, “I certainly think you should talk to The Hill and The Blade and ask them why they use those words.”

Issa continued to insist the next day that his ad was free of homophobia. The former congressman told Politico that DeMaio “made no public statements complaining about [The Blade] or The Hill” at the time the articles were originally published, adding that he doesn’t consider the word “gay” to be a slur (how enlightened of him).

Issa went even further, saying he has gay staffers, and protesting, “This ad is not about anything related to that term.” Issa did not, however, explain why he chose to use two large headlines about DeMaio’s sexual orientation if he didn’t want viewers to clearly see them.

● KS-Sen: Former Red State director Bryan Pruitt announced Friday that he was dropping out of the GOP primary for the U.S. Senate and running instead for the state Senate.

● ME-Sen: Democratic state House Speaker Sara Gideon’s latest TV ad is a minute-long spot that shows Gideon embarking on a “supper with Sara” tour and meeting with voters across the state. Gideon is filmed telling voters that “we have to take the pharmaceutical companies on,” while supporters argue it’s time for new blood in the Senate.

● FL-26: On Thursday, Donald Trump tweeted out his endorsement for Miami-Dade County Mayor Carlos Giménez’s campaign against freshman Democratic Rep. Debbie Mucarsel-Powell. Giménez famously backed Hillary Clinton over Trump in 2016, so the White House’s seal of approval could help the mayor avoid any problems in the August GOP primary. However, Trump’s support is unlikely to be such an asset for the mayor in November in this 57-41 Clinton seat.

● GA-14: Dallas Mayor Boyd Austin announced Thursday that he would run for the state Senate rather than seek the GOP nod for this open congressional seat.

● MI-06: GOP Rep. Fred Upton just can’t seem to make up his mind about seeking a 18th term this year, even with Michigan’s filing deadline looming—and a competitive race for his 6th District in the offing no matter what he chooses to do. Here’s his latest statement about his timeline for making a decision, made during a radio interview on Thursday:

“We’ll make a decision in the next couple of weeks, for sure.”

You know … that sure sounds familiar. In fact, it sure sounds identical. This is what Upton had to say on Jan. 7—you know, about two weeks ago:

“We’ll make that decision in the next couple of weeks, for sure.”

Okay, here’s something even funnier, though: Fred Upton from Sept. 9:

“[W]e’ll make a decision in a couple months.”

● NJ-03, NJ-02: On Friday, wealthy businessman David Richter told the Press of Atlantic City that he was considering dropping his GOP primary bid against Rep. Jeff Van Drew, who left the Democratic Party last month, and challenging freshman Democratic Rep. Andy Kim in the 3rd District instead. Richter added that he would make up his mind in the next week.

Indeed, Richter may want to make up his mind very quickly. The New Jersey Globe’s David Wildstein writes that former Gov. Chris Christie has told Richter that if he endorses Van Drew, the candidate could wind up on the same stage as Donald Trump on Tuesday when Trump holds his rally in the 2nd District.

Wildstein adds that if this happens, it could make it easier for Richter to secure the important party organization line in Ocean County, which is home to 55% of the 3rd District’s Trump voters. (The balance of the district is in Burlington County, where party leaders are supporting former Burlington County Freeholder Kate Gibbs.)

Richter is the only notable Republican challenging Van Drew in the June GOP primary, and his departure from the 2nd District would clear the way for the defector to win his new party’s nomination.

It’s also possible that Richter could improve the GOP’s chances against Kim in the 3rd District. While party leaders were reportedly excited about Gibbs, she had a mere $138,000 on-hand at the end of December after five weeks in the race. That’s not an impressive figure in any competitive seat, and it’s especially underwhelming in a district that’s split between the pricey Philadelphia media market and the ultra-expensive New York City market. Richter had a considerably larger $515,000 to spend, though almost all of that was self-funded.

However, Richter does have one big potential liability. The candidate grew up in the 3rd District in Willingboro, but he doesn’t appear to have lived there in a while. Richter was residing in Princeton, which is located in the safely blue 12th District, when he announced his campaign against Van Drew over the summer, and he soon relocated to Avalon in the far southern point of the 2nd District.

Avalon is about 56 miles away from the nearest community in the 3rd District, and Richter said Friday that he’d move to Kim’s seat if he ran there. However, it wouldn’t be hard for Richter’s political foes to portray him as a carpetbagger if he relocates for the second time in the space of a year to run for another office.

● PA-08: Republican Jim Bognet, who served in the Trump administration as a senior vice president for communications for the Export-Import Bank, announced on Thursday that he would run in the April primary to take on Democratic Rep. Matt Cartwright. Bognet joins a crowded field that includes Army veteran Earl Granville, who recently picked up an endorsement from House Minority Leader Kevin McCarthy.

● TX-12: Protect Freedom PAC, which is allied with the anti-tax hardliners at the Club for Growth, is putting at least $547,000 behind a new TV ad attacking Rep. Kay Granger ahead of the March 3 Republican primary. The spot starts off by asking if voters can trust Granger to support their values as she’s shown in a 2007 MSNBC clip saying, “I am a pro-choice Republican,” and they note she has voted repeatedly against defunding Planned Parenthood in recent years. However, the ad of course makes no mention that Granger earlier this month signed onto an amicus brief along with more than 200 other Republican members of Congress urging the Supreme Court to overturn Roe v. Wade.

● TX-17: Businesswoman Renee Swann is launching her first Republican primary ad with a spot that blasts Obamacare and claims that Democrats want a “government takeover” of health care, which she attacks as “socialism.”

● TX-24: Former Irving Mayor Beth Van Duyne is up with her first TV spot of the March GOP primary for this open seat. Van Duyne walks through a prison and says, “There’s one thing we can all agree on: When criminal illegals commit crimes and hit these doors, they should be deported.” The candidate goes on to say that under her leadership, Irving was one of the top-ten safest cities in America. Van Duyne then decries “liberal elites” who “want sanctuary cities.”

● WI-03: Republican Jessi Ebben, a public relations professional and first-time candidate, announced on Friday that she would compete in the August primary to challenge Democratic Rep. Ron Kind.