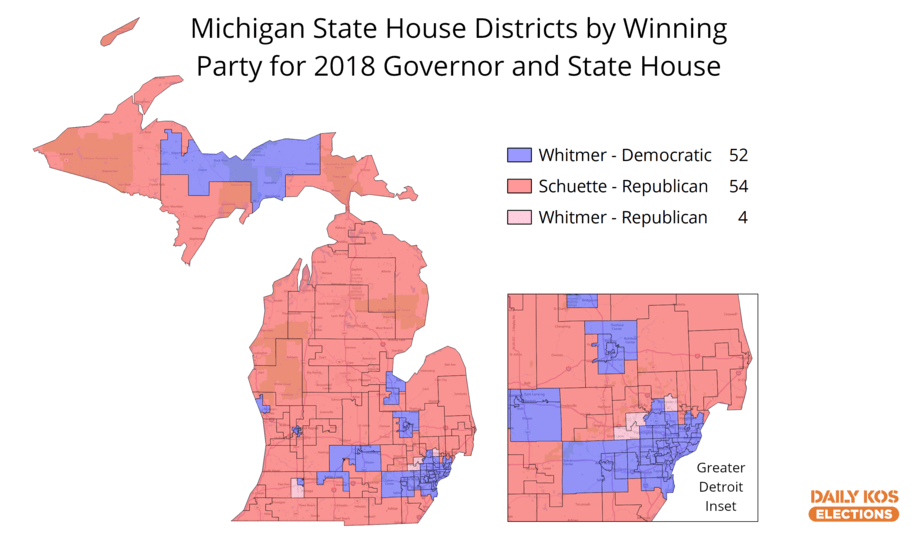 However, because Republicans heavily gerrymandered the map to benefit themselves, the Democrats’ presidential nominee will need to decisively defeat Donald Trump in the Wolverine State to give their party a chance. Democratic Sen. Debbie Stabenow’s successful re-election campaign illustrates this hurdle: Even though she beat Republican John James 52-46 statewide, she only took 54 House districts.

The entire state House is up for re-election every two years, and members can serve a maximum of three terms, making Michigan’s term limits among the most restrictive in the country. Democrats made big gains in the House last cycle and reduced the GOP majority from 63-47 to 58-52.

Most importantly, four members of the GOP caucus sit in seats that backed Whitmer, making those the four ripest targets for Democrats. At the same time, no Democratic incumbents hold seats won by Schuette. However, three of these GOP-held Whitmer seats also supported Donald Trump when he narrowly carried the state two years before, so sweeping them all be a difficult task.

Team Blue’s best pickup opportunity in the state looks like HD-61 in the Kalamazoo area, which supported Whitmer by a wide 54-43 margin and backed Stabenow by a 53-45 spread. The seat also went for Hillary Clinton 49-45, making it the one GOP-held district in the entire chamber that didn’t back Trump. Republican incumbent Brandt Iden won his third term 51-49 in 2018, but term limits prevent him from running again this year.

Two other Republican seats, both located in Oakland County in the Detroit suburbs, also went for both Whitmer and Stabenow, though Trump carried them both. HD-39 backed Trump 50-46, but it supported Whitmer 53-45 and Stabenow 51-47. Republican Ryan Berman was elected to his first term by a wide 54-42, but that election took place under unusual circumstances: The Democratic candidate, Jennifer Suidan, was charged with embezzlement during the race and was sentenced to five years’ probation after the election.

The fourth and final GOP-held Whitmer seat is HD-45, which is also located in Oakland County, but it supported her just 49.2-48.8, by a margin of 181 votes. Trump took the seat by a wider 51-44 margin, while James defeated Stabenow here 50-49. Republican incumbent Michael Webber won 55-45, but, like Iden and Crawford, he’s termed-out this year.

Democrats have a few potential targets if they fail to take all four of those seats, but they aren’t great. Another five House districts backed Schuette by a margin of less than 2%, but Trump took them all by double digits in 2016. Democrats also will need to play defense in the 10 seats they hold that voted for Trump (though two years later they all went for Whitmer). All of this means that, while Democrats do have a path to the majority, they’ll need essentially everything to go right this fall.

As for the state Senate, it’s only up in midterm years, so the GOP’s 22-16 majority is safe there for almost another three years, barring an unlikely avalanche of special elections. The good news for Democrats, though, is that 2022’s races for the legislature (and Congress) will be held under very different maps than the GOP gerrymanders in force now.

That’s because in 2018, voters approved the creation of an independent redistricting commission to draw the new lines in place of the state legislature. These new maps could give Democrats a better chance to win (or hold) the House as well as the Senate, where the GOP has been in control since it successfully recalled two Democratic legislators in early 1984.

P.S. You can find our master list of statewide election results by congressional and legislative district here, which we’ll be updating as we add new states; you can also find all our data from 2018 and past cycles here.

The deadline to file fundraising numbers for federal campaigns is Jan. 31. We’ll have our House and Senate fundraising charts available next week.

● AL-Sen: The extremist Club for Growth is going back on the air ahead of the March primary with a TV spot they first aired in November against Rep. Bradley Byrne, an establishment-aligned Republican whom they’ve long hated. The commercial takes aim at Byrne for supporting the Export-Import Bank, which is another favorite Club target.

Warnock quickly earned an endorsement from 2018 gubernatorial nominee Stacey Abrams, who was Team Blue’s top choice until she took her name out of the running last year. The Atlanta Journal-Constitution wrote earlier this month that national Democrats, as well as Abrams, wanted Warnock to challenge Loeffler, though the DSCC has not formally taken sides.

Warnock, who would be Georgia’s first black senator, is the senior pastor of the famous Ebenezer Baptist Church in Atlanta, where Martin Luther King Jr. once held the pulpit. Warnock has never run for office before, but he’s been involved in politics as the chair of the New Georgia Project, a group founded by Abrams with the goal of registering people of color to vote. Warnock has also used his position to call for expanding Medicaid and reforming Georgia’s criminal justice system.

Warnock joins businessman Matt Lieberman on the Democratic side, and another local politician says he’s also likely to run for Team Blue. Former U.S. Attorney Ed Tarver said Thursday that Warnock’s entry hadn’t changed his own plans to run, adding that he plans to kick off his campaign in the next few weeks.

GOP Rep. Doug Collins also entered the race against Loeffler this week, but legislative leaders quickly dealt him a setback. On Thursday, state House Speaker David Ralston, despite being a Collins ally, announced that a bill that would do away with the all-party primary in favor of a traditional partisan primary would be unlikely to apply to this year’s special election. The legislation cleared the Governmental Affairs Committee earlier this week but was returned to the committee for revisions. Republican Gov. Brian Kemp has threatened to veto any measure that would change the rules of this year’s special Senate race.

As we’ve noted before, both Democrats and Collins would almost certainly benefit from the proposed rule change, but it looks like the status quo will persist this year. However, Collins is arguing that he’d still have the advantage in a November all-party primary, though the data he released isn’t especially persuasive. Collins released a poll this week from McLaughlin & Associates showing Lieberman in front with 42% while Collins leads Loeffler 32-11 for the second spot in a likely January runoff.

McLaughlin is a firm that’s infamous even in GOP circles for its poor track record, but this survey is also rather stale. The poll was conducted in mid-December, when Loeffler had just been appointed to the Senate and had little name recognition. But the wealthy senator has since launched a $2.6 million ad campaign, and she’s reportedly pledged to spend $20 million to get her name out.

Lieberman was also the only Democrat mentioned in the poll, but Warnock’s Thursday announcement means he’s now no longer Team Blue’s only candidate, scrambling the picture further. And if Tarver does go ahead with his planned campaign, he could complicate matters even more by potentially splitting the vote on the left three ways and allowing Loeffler and Collins to advance to an all-GOP runoff.

Collins, meanwhile, hasn’t been on the receiving end of any negative ads yet, but that’s about to change. Politico reports that next week, the Club for Growth will start a five-week TV campaign targeting the congressman for a hefty $3 million.

● IA-Sen: Businessman Eddie Mauro raised just $73,000 from donors during the fourth quarter of 2019, but the Democrat loaned himself an additional $1.5 million and ended December with $1.4 million in the bank. However, during that same quarter, Mauro repaid himself $850,000 that he’d previously loaned to his campaign. It’s not clear why Mauro made this move.

The only other Democrat to release fundraising figures so far, real estate executive Theresa Greenfield, previously said she brought in $1.6 million in the final three months of last year and had $2.1 million on hand. Republican Sen. Joni Ernst said she raised $1.7 million and had $4.9 million left.

● GA-09: State Rep. Kevin Tanner announced Thursday that he would seek the GOP nod to succeed Senate candidate Doug Collins in this safely red seat. Tanner was first elected to the legislature in 2012, and he serves as the chair of the influential Transportation Committee.

● IN-05: Former state Sen. Mike Delph recently told Howey Politics that he would not seek the GOP nod for this open seat.

● NY-15: This week, Assemblyman Michael Blake picked up endorsements in the June Democratic primary from SEIU 32BJ and 1199 SEIU, which represent building workers and healthcare workers, respectively. These groups make up two of the “big four” unions in New York City politics along with the Hotel Trades Council and the United Federation of Teachers. The Hotel Trades Council is supporting New York City Councilman Ritchie Torres, while the UFT does not appear to have taken sides yet in the crowded primary contest to succeed retiring Rep. Jose Serrano in this safely blue seat in The Bronx.