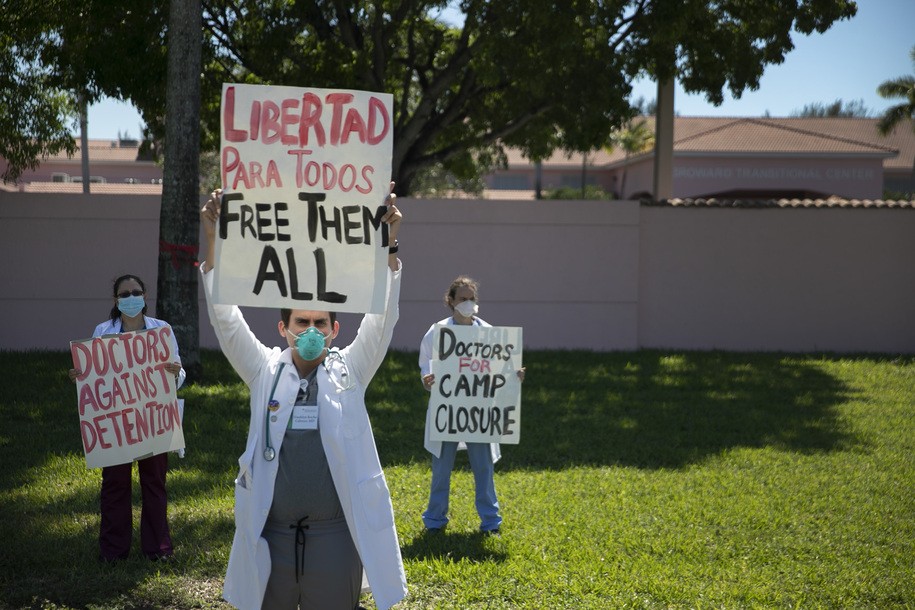 CBS News reported that the confirmed cases Karnes were revealed by an independent inspector who said the families were “stable, asymptomatic, and remain housed in medical isolation rooms,” but as has been seen in adult detention facilities, ”noted that not all staff complied with the policy of wearing face masks and that social distancing was not always enforced, citing video footage and interviews with families,” the report said.

Sheridan Ordin, the independent inspector, warned that ICE’s “lack of consistent compliance with recommended masking among some staff and distancing requirements in common eating areas elevate the risk that the virus once introduced into the facility may not be well contained,” CBS News continued. But it’s been clear from years of statements, investigations, and reports that families at migrant family jails like Karnes, South Texas Family Residential Center in Dilley, and Berks County Residential Center in Pennsylvania have never been safe, especially now during a pandemic.

Laila Ayub, an attorney with RAICES, said in a sworn declaration in March that clients at Karnes told her they were led into rooms to sign forms about coronavirus, but that it “seemed like a way for staff to put on a facade of having explained coronavirus and taken the necessary precautions, but they did not actually explain it to them.” When Ayub visited the facility, she said staff didn’t ask her to wash her hands or give her any gloves. Staffers themselves weren’t wearing gloves or washing their hands either, she said.

Haitian asylum-seeker “C.L.” said at the time that officials at Dilley took no steps to protect detained families from the virus. “My son and I are in a room with about nine other people,” C.L said. “We sleep very close together, and there is very little space to maintain distance from other people when we are in the room. When I am laying down in my bed, I can touch the bed next to me. My son has a cough and other people in our room also have a cough. They have never quarantined the people who have a cough.”

None of this has to be happening. “ICE has the discretion to release everyone in its custody,” RAICES attorney Alexandra Cohen told CBS News. “It is their decision to keep people detained.” Instead, ICE has made a deliberate decision to keep families jailed: “The agency recently conducted a parole review of all the children in its custody, but it denied most of their requests for release,” CBS News continued. “Among other reasons, ICE said it did not grant parole to most of the families because the parents did not agree to be separated from their children so the minors could be released to sponsors.”