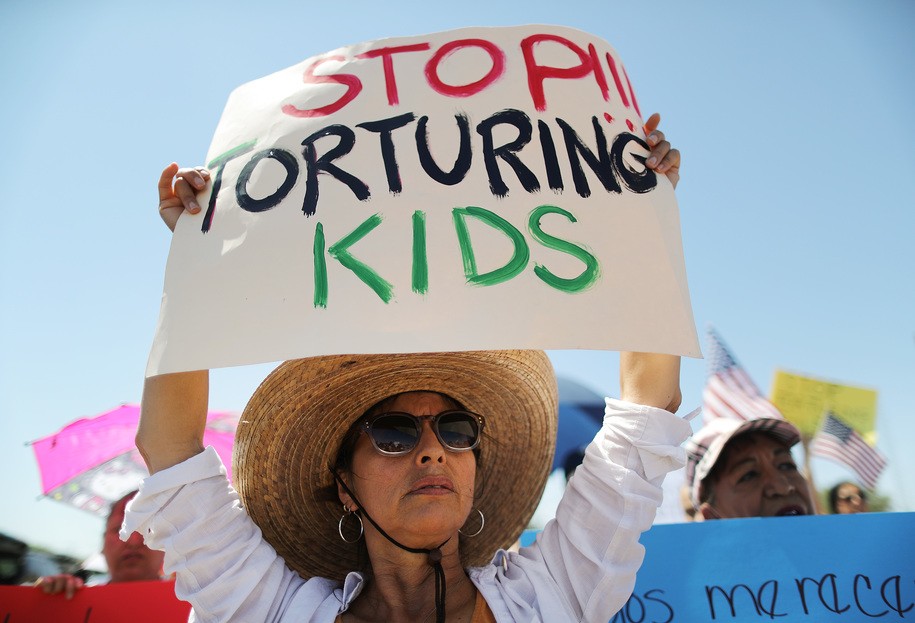 In video from TCRP, Andrew Udelsman, an attorney with the organization, is confronted by three unidentified men after exiting an elevator onto one of the upper floors of Hampton Inn & Suites hotel in McAllen, a hotel chain owned by Hilton. It’s a normal hotel, but what’s happening inside the rooms isn’t normal. Children are being held by ICE contractor MVM Inc. as they presumably wait for quick deportation under a Stephen Miller-led order, in violation of anti-trafficking law.

The men, wearing protective gear but no identification, quickly block the attorney, who yells in Spanish in the direction of the rooms that he’s a lawyer and is there to help. As one of the unidentified men then more aggressively shoves him back, he again yells to the children in Spanish, asking them to say their names and if they’re in trouble:

In video outside the location, TRCP’s Zenen Jaimes Perez slammed the violent force and said that “all we’re to do is make sure that the people who are inside are able to get some type of legal help.” He said that under Miller’s expulsion policy, “no one is being afforded due process. We have children and other asylum seekers in here, with no paper trail. This is literally a black box of information. If we cannot get their information, they will be expelled from this county, back into violence.”

Ã¢ÂÂWhat the expulsions policy is doing right now is no one is being afforded due process. We have children and asylum seekers in here.Ã¢ÂÂ https://t.co/kiKZlq1YPd

In another image shared by TCRP, people could be seen holding handwritten signs up to the window reading: “We don’t have phone,” and “we need your help.” While it was unclear if the people holding up the signs were children, it was clear one of the figures was holding a baby:

“This was ONE room in that hotel,” Perez said in another tweet. “We know that at least two entire FLOORS are being used to detain people before they are illegally expelled.Our government is running a black-site in McAllen, TX to circumvent federal and international protections for asylum seekers.”

This week’s shocking AP report said that MVM Inc.—which holds a federal contract close to $50 million—has held children as young as 1 for several days at a time. As I noted on Thursday, it’s unclear how some of the younger children arrived to the U.S alone, but there’ve been reports that desperate parents forced to wait out their asylum cases in Mexico under another cruel administration policy have sent their kids alone back into the U.S.

“This is completely illegal,” Udelsman said according to Texas Public Radio. “They’re violating domestic and international law, and they’re committing grave abuses against these children.”