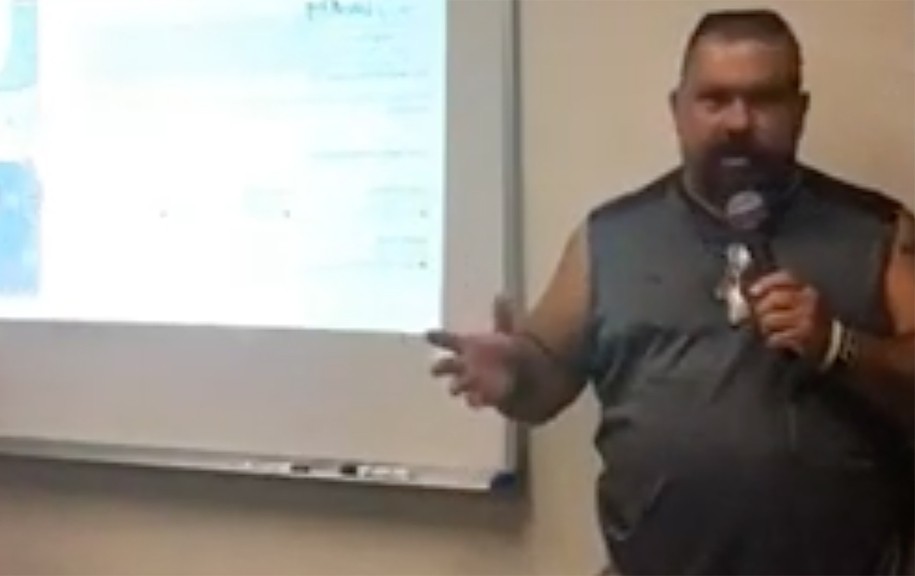 The rally is scheduled for noon at the courthouse. “We are going to voice our concern,” Bundy explained in a Facebook video, claiming that the deputies were at fault for the shooting: “A just, rational officer would never let it escalate.”

He added: “Bring a small mirror to leave with the deputies to remind them that they must reflect on their actions and treat people the way they want to be treated.”

The Lewis County sheriff’s office, in a Facebook post, advised anyone not participating in the protest to “avoid the area because of congestion and increased law enforcement presence during the event.”

Ironically, Anderson had spoken to a gathering of Bundy-led “Patriots” in Boise three nights before he was shot, shortly after Bundy’s confrontation with health-board officials. In a video from the speech, he appeared to anticipate his imminent showdown with police:

“I feel out of place in my own country and that pisses me off. When I’m up here, you know, am I gonna get pulled over? Am I gonna get stopped? I don’t feel free, and I’m a little bit of a radical. I’m not gonna get arrested. I’ve already been there. They don’t play and fight by our rules, they don’t follow the Constitution, so I’m not gonna do that.

“I made my line in the sand. I know God watches over me and protects me, but it’s falling fast. I mean the money … you’ve gotta use credit cards now, you can’t go in stores—it’s the mask of the Beast. And we’re not going to shop in places and buy at places, and I feel I’m in the minority now.”

Anderson was shot by four deputies following a high-speed chase that began in Lewis County on U.S. Highway 12, when he was pulled over by a Lewis County deputy for a “vehicle malfunction” and took off at high speed after briefly stopping, driving quickly into neighboring Idaho County, where he is a resident.

According to a probable cause affidavit filed in the case, after fleeing the first stop, Anderson phoned the Idaho County Sheriff’s Office and told the dispatcher he was in “hot pursuit” and would not stop: “This is serious s—. If they try to stop me people are going to die here, OK?”

He spoke with Idaho County Sheriff Doug Giddings a short while later, the affidavit says, telling him: “I’m going to shoot people.”

Another Idaho County officer tried to calm him down over the phone and urged him to pull over and surrender. That officer asked him: “OK, what, what’s going to happen right now if you keep running?”

When the chase reached the small town of Ferdinand, two Lewis County deputies, a Nez Perce Tribal officer, and an Idaho County deputy had all positioned their cars on Highway 12 in a semi-circle to form a blockade. Anderson stopped, opened the driver’s-side door of his vehicle and grabbed “a sawed off 12 gauge Winchester shotgun with a sawn off butt stock” that was on the passenger seat.

As Anderson fiddled with the gun—appearing to load it—deputies ordered him to put the gun down or else he would be shot. Anderson replied: “I know you will.”

After more back-and-forth, Anderson raised the shotgun, pointed toward a Lewis County deputy, and fired. However, the shot missed, and all four officers opened fire on him. Despite being wounded in the face, he managed to raise the gun a last time before collapsing.

He was transported by helicopter, first to a Lewiston hospital and then to a Spokane hospital, the nearest medical facility capable of treating his wounds. After he recovered sufficiently, he was transported to the Spokane County Jail to await extradition from Washington state.

Anderson gained brief national notoriety in 2016 as one of the four final holdouts who remained inside the Malheur reserve buildings after the standoff’s leaders, including Ammon Bundy, had been arrested at a roadblock. During that latter confrontation, another occupier, Robert “LaVoy” Finicum, was shot to death by Oregon State Police.

Anderson and his wife, Sandy, who both live in the north-central Idaho town of Riggins, had joined the Malheur occupation earlier; after the roadblock arrests, they became frantic in defending their positions inside the refuge, using construction equipment to build defensive berms and recording increasingly wild-eyed videos for their supporters’ consumption.

In one of those videos, Sean Anderson could be seen urging veterans and others to come rushing to Oregon to help defend them: “Media’s been waiting for a bloodbath this whole time we been here. Now there’s gonna be one, and they’re running! They’re told to run because the feds don’t want people to know who’s murdering us!”

After surrendering, Anderson and his wife, Sandy, later took a plea bargain in which they only pleaded guilty to trespass, paid $1,000 in restitution, and were released on probation.